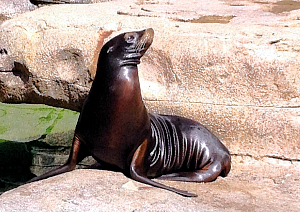 The large crest of muscle on the males’ heads paired with the long, narrow snout sets the California Sea Lion apart from similar species.

Known for their intelligence, playfulness, and agility, California Sea Lions are found throughout the West Coast, from Baja California to British Columbia. Their long, wing-shaped front flippers give them a streamlined figure when swimming, as well as considerable mobility on land. Their playful attitude has also been noted when seen blowing bubbles, surfing, and playing with inanimate objects.

Their crests grow with age and contribute to the general sexual dimorphism of the species that is also easily seen in the size difference between the two genders. While the average male is 7-8 feet in length and 700-800 pounds, the average female is 6-6.5 feet long and weighs 250lbs. The uniformly dark brown, tan, or silver coats of both male and female California Sea Lions are short, coarse, and lack insulation, causing them to rely on blubber for warmth. This fur more dark and sleek when wet and is molted annually.

California Sea Lions are both social and vocal creatures; communicating with a series of barks, grunts, and growls, they feed cooperatively in groups up to 500. They feed mostly on Pacific Hake, sardines, Market Squid, rockfish, salmon, and anchovy, but the proportions depend on relative abundance in the area at the time. Their average foraging trips last between one and two days, but up to ten if food is scarce. Diving mostly during sunrise and sunset at an average depth of 110 feet, they take in about 7% of their body weight daily.

Rarely more than 20 miles from land, Sea lions come ashore throughout the year, mostly congregating on land during breeding season and migrating towards prey outside of breeding season. Sandy beaches are their preferred haul out sites, but they will also climb rocky bluffs and manmade structures. When breeding, males fight for space, resulting in evenly spaced territories in intervals of 35 feet where males often claim up to 14 females. Females give birth once a year between May and August to single pup. These pups imprint on their mothers at birth, creating a very strong relationship, and nurse for up to one year. Most of the breeding takes place in the California Channel Islands.

Sea Lions have been hunted for food, hides, blubber, and whiskers; two sea lions yielded one barrel of oil. This killing, however, was banned in the United States, Mexico, and Canada in the early 1970’s. Since then, the California Sea Lion has become the most abundant pinniped in the California Current with a still-growing population of 240,000 in 2005.