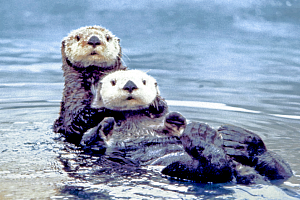 Physical Characteristics
Because of their playful and curious attitudes, sea otters are often a favorite of marine mammal lovers. Recognized by their rounded heads, small eyes, and visible, pinched ears, sea otters are the largest member of the weasel family.

Other than the river otter, they are also the smallest marine mammal, with an average length of four to six feet and weight of sixty to one hundred pounds.
Feeding and Behavior
Sea otters are best known for their luxurious fur coats that keep them warm and buoyant; at 15,500 hairs per square inch they have thicker fur than any other mammal. Such a coat paired with a high metabolic rate allows them to thrive without the layer of blubber that most marine mammals require. Their high metabolism enables them to eat about 25% of their weight in food every day. While their main diet consists of clams, sea urchins, and abalone, otters eat over 150 species – whatever is abundant in area. Such consumption has led sea otters to be recognized as a keystone species –the presence or absence of the otters greatly affects the surrounding ecosystem.

Sea otters spend most of their life within one mile of shore; their movement on land is slow and limited, causing them to only come out of the water during rough storms. They reside in near-shore rocky, coastal environments, relying on kelp, or in soft-bottomed estuaries where prey is abundant. Otters are solitary hunters, often staying in small groups or alone. Their average dives to retrieve food are in water less than 100ft deep, but dives up to 975ft have been recorded. Flaps of skin in their underarms allow them to store food and hunt for longer periods of time. After diving, Sea otters will float on their backs to eat, using rocks as anvils to smash the shells of their prey.

Population Threats and Conservation
Originally, sea otters were said to have ranged from Baja California, up the coast, and along the Aleutian Chain to Japan. Reportedly discovered in 1741, Sea Otters were very abundant throughout this area, estimating at 800,000 in the population. Extreme hunting for pelts, however, killed about one million sea otters in just 170 years, bringing the species almost to extinction. In 1911 a treaty between Russia, the United States, Japan, and Great Britain was made to protect sea otters and Northern Fur Seals (combined, these were the two most prized North Pacific fur-bearing marine mammal species hunted very competitively in the early 19th century by Russia, America, Britain and others). The population of otters has slowly recovered to a modern estimate of about 107,000, due in part to several relocation efforts. Today sea otters are found in patches, ranging from Central California to the Aleutian Islands. Without the threat of hunting, oil spills are one of the biggest dangers to sea otter recovery, as well as entanglement with fishing gear, other pollutants, and climate change.

While the individual rogue sea otter has been sited near the Fort Ross area, the original mass has not yet returned to this region. With present conservation efforts and a recovering population, however, we remain hopeful that sea otters will once again be seen off the coast at Fort Ross.