The San Andreas fault, California’s major earthquake rift zone, is one natural feature that elicits a strong response from most visitors — many of us have experienced earthquakes and all of us have seen photos of how powerful they can truly be. This world-famous fault runs along much of the length of the state, skirting on and just offshore California’s coast, and it clearly comes ashore at Ross where its 1906 legacy is still visible.

Fort Ross is an excellent destination to witness first-hand the powerful effects of plate tectonics and the lasting effect of big earthquakes. The park provides several clearly visible markers of the 1906 temblor, all of which are fairly accessible to the road just uphill from Highway One. Even visitors with an untrained eye can see how the sag ponds left behind from the rift caused by the 1906 quake; clusters of redwood treetops directly on the fault are still damaged and cracked, and there is a clear offset to the gently sloping coastal hill.

Also in our Fort Ross Visitor Center, we have photos documenting the sizable damage the 1906 quake caused to the historic fort compound, in particular the Fort Ross chapel. All of this is a testament to the incomparable power that these forces of nature can unleash, making the park one of the more accessible destinations at which to witness first-hand the power of plate tectonics. 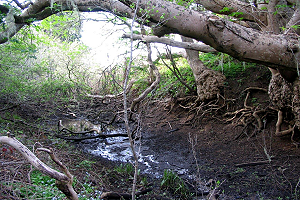 Fort Ross sits on the ocean side of The San Andreas fault zone. If you look carefully at the lay of the land above the fort you can see it, and if you walk up Fort Ross Road, the faultline is clearly visible. There is a red marker on the road, marking the actual faultlline.

The 1906 earthquake that destroyed San Francisco was centered very near to Fort Ross, and many of the Russian-era buildings were destroyed in that 1906 event. The San Andreas fault runs offshore from around Tomales bay in Marin, but comes ashore at Fort Ross. From Fort Ross the fault continues overland, forming the valley through which the Gualala River flows. It goes back offshore at Point Arena.

California’s major earthquake rift zone, passes through San Francisco and comes ashore two miles south of Fort Ross, then runs north and through the orchard. The fault is the result of the boundaries of the Pacific and North American plates passing by each other. On this portion of the fault the movement tends to be in sudden large events, and it is thought that this section of the San Andreas Fault moves significantly only every few hundred years. California’s 1906 earthquake was the sudden result of such motion. The fort itself lies on marine sediments to the seaward side of the fault. These sediments were deposited underwater on the Pacific plate forty to sixty million years ago, and have moved from the south about three hundred miles up the California coast. 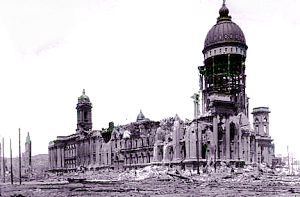 In 1906 the land at Fort Ross shifted 12.6 feet along a narrow well-defined area above the plate movement. The resulting surface features can still be seen today. Offset creeks, sag ponds (depressions along the fault which often become filled with water in winter), escarpments, shifted fences, and damaged trees are lasting evidence of the quake.

At 5:12 AM on April 18, 1906 the San Andreas Fault shifted and caused damage from San Juan Bautista to Cape Mendocino. The epicenter was just south of San Francisco. This is San Francisco City Hall after the earthquake. (Steinbrugge Collection, UC Berkeley) 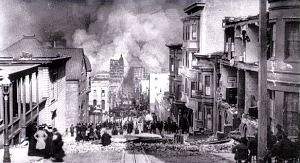 Violent shocks punctuated the strong shaking which lasted up to a minute. The quake is remembered for the San Francisco fires; 2831 acres burned, destroying 28,188 structures. 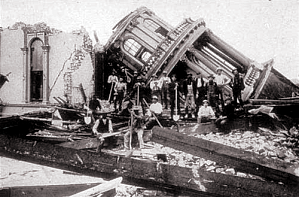 The 1906 quake was felt from southern Oregon to Los Angeles. Damage was severe in many places along the faultrupture. Santa Rosa’s business district was built on an alluvial plane 20 miles from the fault line. The city was shaken to rubble and ravaged by fire. The Sonoma County Courthouse in Santa Rosa, 1906. (Steinbrugge Collection)

The San Andreas Fault runs through the Fort Ross area. At that time the Call Ranch was a shipping and social center for the surrounding community. The old Russian structures at Fort Ross had been maintained and modified by successive owners. 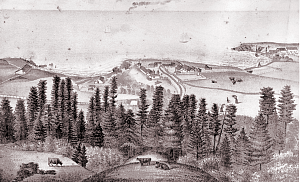 The Russian fort had been made a California State Historic Site in early 1906, but less than a month later the April 18 earthquake damaged the old Russian structures. Fort Ross pictured in Thompson & West’s Atlas, 1877.

The earthquake ruptured the ground at Fort Ross. “There were several shocks, quickly following each other; the first was not the strongest. They seemed to increase in force up to the third or fourth and come from different directions. . .” Report of the California Earthquake Commission, 1908. Rosa Call standing by the surface trace, 1906. Panorama of Fort Ross with the collapsed chapel on the left, 1906.” 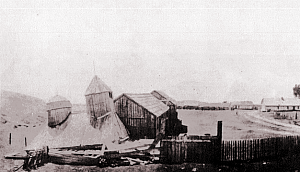 . . . Chimney tops were thrown off . . . Many redwood and pine trees were broken off . . . All loose furniture was turned over, and a few frame buildings set upon unbraced posts were shaken down.” 1908 Report. “The dwelling of G. W. Call, proprietor of the place, was violently shaken . . . In cleaning up the wreck after the shock, six wheelbarrow loads of broken objects were picked up off the floors of the rooms. In Mr. Call’s room a high case was thrown across the bed in which he was sleeping.” 1908 Report. “At Fort Ross, 0.75 mile from the fault, the  intensity of the shock was probably greater than the actual damage would indicate. 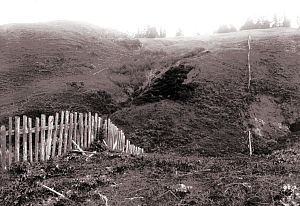 The old Russian church and several other buildings suffered thru collapse of their underpinning, but all in a fair state of repair stood the shock, as did the more recently built dwellings.” 1908 Report. The walls of the old Russian chapel collapsed, but the roof remained intact. Chapel and barns from behind the fort, 1906. These photos were taken after the 1906 Earthquake in the vicinity of the Doda Ranch, near Mill Creek just south of Fort Ross. The surface rupture and the offset fence resulting from the earthquake are pictured. (Bancroft Library) Repair of the earthquake damage to the Russian chapel began in 1916. The Russian officials quarters, later used as the Fort Ross Saloon, was torn down and the salvaged lumber was used to rebuild the chapel. 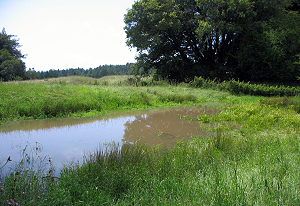 The fort lies on marine sediments to the seaward side of the fault. These sediments were deposited underwater on the Pacific plate forty to sixty million years ago, and have moved from the south about three hundred miles up the California coast. In 1906 the land at Fort Ross shifted 12.6 feet along a narrow well-defined area above the plate movement. The resulting surface features can still be seen today.

Offset fences and creeks, sag ponds (depressions along the fault which often become filled with water in winter), escarpments, and damaged trees are lasting evidence of the quake. 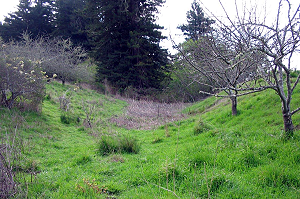 The San Andreas Fault traverses the length of the Fort Ross orchard in an approximate north-south direction. The orchard is situated east of Highway One 1/4 mile up Fort Ross Road. The dramatic effects of the earthquake are still visible in the orchard.

Among the fruit trees there are redwoods damaged in 1906. Escarpments, or pressure ridges, such as this one in the orchard form when two tectonic plates collide. Between trail markers 7 and 8 there is a sag pond. Across the road from the orchard on the trail beginning at the Stanley Spyra Memorial Grove there are many more visible remnants of the 1906 earthquake.

Trunks were split and the top branches snapped off. The sag ponds are still apparent in 2006.

Geologists from the U.S. Geological Survey (USGS) continue to investigate the North Coast segment of the fault line at Fort Ross.

Studies conducted in the Fort Ross Orchard, the former Doda Ranch, and other locations are aimed at determining methods to accurately forecast earthquakes. 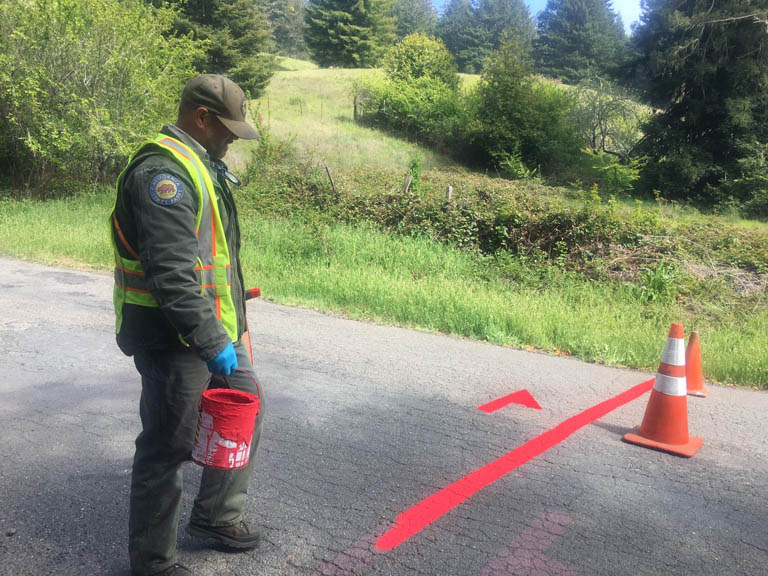