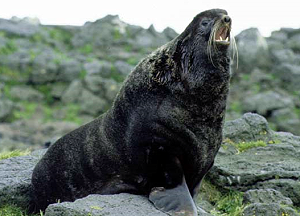 Because of their rounded, convex head and their short noses, the Northern Fur Seal has been described as “bearlike.” A sexually dimorphic species, the average male is up to four times larger than the female, with a length of 5-7 feet and weight of 400-600 pounds. The genders are also separated by coloring; males are black or dark brown while females are a lighter brown or grey. Northern Fur Seals have the longest rear flippers of all eared seals, constituting for up to one third of their body length. The front flippers, however, are shorter, and naked from the wrist down. Their dense under-fur on the rest of their bodies provides them with warmth so they need not rely on blubber for insulation.

As the most pelagic pinniped, Northern Fur Seals spend up to nine months of the year at sea, coming onshore only for breeding. They reside mostly off the continental shelf, 20-70 miles offshore, in deep waters, concentrating in offshore islands and upwelling areas. These seals are mostly solitary when at sea, but may form foraging groups of 2-4, swimming at speeds up to 15 miles per hour. Larger groups have been noted when food is abundant, but this is rare. Northern Fur Seals typically feed in evening, night, and early morning and have up to 70 species in their diet; in California the dominant prey includes anchovy, herring, squid, and rockfish.

Northern Fur Seals generally range from Southern California to the Bering Sea, and across to central Japan, but most of their breeding takes place in the southern Bering Sea. The breeding season is April to November, with a peak in late June. These seals are playful and intelligent, but also very aggressive during breeding season. Males defend group of 15-20 females with vocalization, chest-butting, and charging. They fast during breeding for an average of 40 days, losing up to 20% of their body weight; their defenses rarely include fighting because they need to preserve energy. Females nurse the pups for about four months, leaving them gathered together on the beach while out foraging.

Due to mass hunting by European sealers, the Northern Fur Seal population was taken from 2.5 million in 1787 to 300,000 in 1909. In 1911, however, the Northern Pacific Fur Seal Convention was created between the United States, Japan, and the United Kingdom, limiting hunting to only adult males. The agreement was terminated during WWII but reinstated in 1957, in which time the population recovered to 1.5 million. With this recovery, an annual harvest of females began, but was stopped in 1985 because of another large population decline. In addition to hunting, El Niño Southern Oscillation (ENSO) events greatly affect the population; 67-80% of the pups died in one colony during the 1982 and 1998 events.