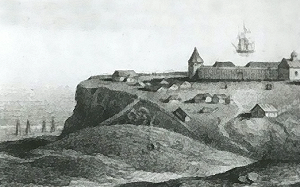 Outside the main gate of the fort stood the dwellings of the Native Alaskans who were brought to the settlement by the Russian-American Company to hunt sea mammals and provide a work force for the colony. The Native Alaskan Village Site was the primary residential area for single Native Alaskan men, Native Alaskan families, and interethnic households composed of Native Alaskan men and Kashaya and Coast Miwok Native Californian women. The village was situated on the marine terrace in front of the stockade walls. The extensive archaeological deposit is on approximately one-half acre, and was investigated by archaeologists from State Parks and University of California, Berkeley, in the summers of 1989, 1991, and 1992.

The Alaska Natives brought their native baidarkas, swift maneuverable kayaks, used for hunting and transport. From these baidarkas they hunted the valuable sea otter and other sea mammals along the California coast and from a base on the Farallon Islands. Hunted by the Americans, English, Spanish, and Russians, the number of sea otters was greatly diminished by the early 1820s. The Russian-American Company made the first efforts at marine conservation in the North Pacific when they established moratoriums on fur seal and sea otter hunting. In 1834 the Company stopped the harvest of sea otters for 12 years, and then imposed a strict yearly limit.