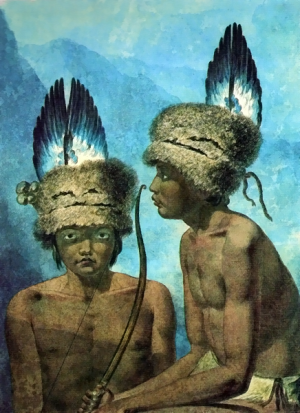 The First People by Otis Parrish

The Kashaya, the first people known to have lived in the area that is now Fort Ross, still live in this region. The local native people consider their name to be “People From the Top of the Land.” The name Kashaya, which means “expert gamblers,” was given to them by a neighboring Pomo group. The Kashaya are one of seven individual groups of people who speak what linguists have labeled as the Pomoan languages.

The Kashaya occupied lands extending about thirty miles from the Gualala River in the north to Duncan’s Point a few miles south of the Russian River. West to east, the Kashaya territory reached from the Pacific coastline over four coastal ranges, down the Warm Springs Creek to the confluence of Dry Creek, some thirty miles inland. The important old village site of Metini situated near the Russian fort was central to the Kashaya territory. The population of pre-contact Kashaya is estimated to have included 1,500 persons living in large villages over the different environmental zones within their territory.

The Kashaya as a group consisted of principal and subsidiary villages politically and socially linked to each other. The large villages were the main residences of the headmen and women. These individuals were sharply attuned to the activities of the group. A religious and political leader was at the center of Kashaya ceremonial and social life.

Metini was the site of an assembly house where people would have come together for ceremonial and social events. Although the Kashaya’s life was related to the natural and spiritual world, they also worried about the welfare of the family. They would also have taken great pains to make a weary traveler or relative comfortable on an overnight visit. They enjoyed a good time at the drop of a leaf.

The Kashaya measured time according to the seasons and learned long ago of the relationship between the sun, moon and the earth, and how they affected the earth and its inhabitants. During the summer they moved to communities along the coast where they gathered food from the sea. In the late fall they moved back inland to their main village sites atop the ridges where shelter was available in the cold winter months. Ceremonies marked the arrival of new fruits, salmon, the ripening of acorns, migration of deer and significant social events. The Kashaya were superbly matched to their environment. They developed successful strategies for hunting, fishing and collecting, and developed special processing and storage techniques for the food resources in their territory. A wide variety of nuts, berries, seeds, greens, roots and tubers were harvested.

The season dictates the place where they have to find their sustenance. In spring they live in the vicinity of the rivers and in locations that abound in water, so that they may catch fish and collect roots and herbs, while they spend the summer in woods and plains, where they collect berries and seeds of wild plants: in autumn they lay in stores of acorns, wild chestnuts, and sometimes nuts… Kostromitinov, 1839.

Along the shore were plentiful supplies of abalone, mussels, fish and marine mammals. A rich variety of sea plants was used. Sea salt was harvested for domestic use as well as for trading. At inland sites deer, elk and a vast number of smaller animals provided an abundant variety of foods. The large game animals were hunted by individuals or small groups.

Family life among the Kashaya and between children and adults involved strong, warm and close emotional relationships. Each village group was composed of any number of extended families which, with the immediate family, provided protection, moral support and identity to individuals. Children enjoyed a good deal of latitude in their behavior. Codes of personal responsibility and family honor were strongly encouraged. Relationships beyond the group were discouraged. Significant personal events for each Kashaya were celebrated with ritual and ceremony which integrated the natural, supernatural and human worlds.

The Kashaya excel in the arts and technologies. They have created a wide variety of tools, utensils, basketry, and objects of personal adornment which reflects a high degree of technical knowledge, design and artistic ingenuity. Their basketry, a ritual art, has achieved extraordinary respect. Their art incorporates stone, bone, shell, horn, fibers and feathers in unique designs.

The Kashaya experienced less acculturation pressure than did other California Indians. They suffered fewer forced removals to missions and reservations. The Kashaya’s first encounter with the outside world was with the Russians, who were more interested in sea otter hunting and establishing a food base in California than in dominating the Kashaya or altering their way of life. In 1812, in accordance with the Russian policy of cooperation with local inhabitants established previously in Siberia and Alaska, the Russians and the Kashaya negotiated for the use of a parcel of land approximately one by two miles in extent. This was Fort Ross. Within a short period of time a tri-cultural community was established, consisting of Russian administrators and workers, Aleut hunters, and the Kashaya, who were employed as laborers. The relationship lasted nearly three decades. Many Kashaya learned to speak Russian, acquired some elements of Russian culture, and occasionally intermarried with both Russians and Aleuts.

Following the Russian departure, Mexican and American settlers entered the coastal lands in growing numbers. Great changes occurred in the Kashaya way of life. No longer could they travel freely over the landscape, for the land became private property. Access to traditional resource areas became more difficult, forcing the Kashaya to become wage earners. Fortunately, relations between the Kashaya and the new settlers at and near Fort Ross were better than in other parts of Sonoma County. Kashaya life, consequently, changed more gradually than did the lifestyle of other tribes.

From the 1870s the Kashaya lived mainly in two villages located on the property of Charles Haupt, about five miles and two ridges inland from Stewarts Point. Haupt was a rancher who had married a Kashaya woman. He welcomed his wife’s people to his ranch. These villages, and a third one at Stewarts Point became the sanctuary of the Kashaya for over forty years. During this period many, especially younger males, were forced to leave their homelands to search for employment. The Kashaya, through all these changes, continued to preserve the vitality and integrity of their culture. Kashaya tradition gave a sense of assurance, quietude and strength in a world growing increasingly alien and formidable. In 1914 the federal government, at the behest of Charles Haupt Jr., started the process to purchase an isolated forty acre tract of land four miles inland from Stewarts Point as a permanent residence for the Kashaya. In the following five years many Kashaya resettled there. This reservation exists today–a tract high on an exposed ridge possessing poor soils and little water. It was hardly an adequate compensation for the loss of their homeland.

Today many Kashaya still reside on the reservation and in areas surrounding Fort Ross. Although the majority live and work in the principal cities of Sonoma County, many have gone on to continue their careers in the greater Bay Area. Presently a growing number of Kashaya occupy positions of political and educational leadership among the Indian and non-Indian communities of this region. Many of their numbers are to be found in the educational, academic, health care, social services, and administrative professions. Although today the Kashaya are contemporary California Indians in a modern and fast moving world, they still retain their strong feelings of attachment to their ancestral land and the way of life that was so long enjoyed by their ancestors.