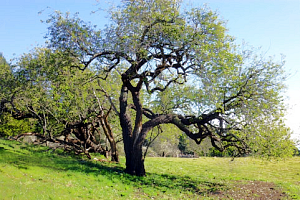 The Fort Ross Orchard is situated on Fort Ross Road, up hill from the Fort Ross main parking lot. The original Fort Ross orchard was started by the Russians in 1814 with a single peach tree; it was further expanded with grapes in 1817 and again in 1820 with apples, peaches, cherries, pear, quince and bergamot. On the left – Planted in 1820, this Capulin Cherry from the Santa Cruz Mission lives today.

From Fort Ross State Historic Park, drive east up Fort Ross Road (up hill from the Fort Ross main parking lot). It’s an easy thirty minute walk up the road, or a few minutes by car. 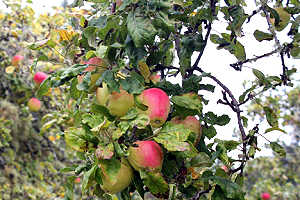 Russians started the orchard in 1814. Trees began to bear fruit in 1828, and helped prevent scurvy, which had been a problem in the Fort’s early years. By 1840 there were two orchards planted. Both were located on the steep sunny hillside, about a half mile up the slope above the Fort. The orchard had a redwood stockade fence. By 1841, when the Russians left, there were 260 trees planted. During the Ranch era, these orchards were expanded greatly, and became a cash crop. Much was destroyed in the 1906 earthquake, though a small portion was kept in production by Carlos Call until 1932.

On the left – Bellflower apple tree was probably planted by the Russians between 1814-1842. 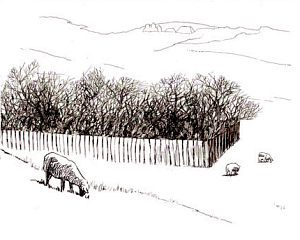 Russian Era – After building their fort, in 1814 the Russians established an orchard, surrounded by an 8’ redwood plank fence to protect it from animals. It was approximately 1.5 acres in size. The first tree planted was a peach, brought from San Francisco. Eventually the orchard also had apple, pear, quince, plum and cherry trees, and also grape vines. The orchard was planted in a style typical of the time: varieties of trees mixed together, not pruned and with tall branches. The grape vines would have grown on the fruit trees. When the Russians sold the fort to John Sutter in 1841, the orchard contained 264 trees, some vines and two small buildings. Four trees from the Russian era still survive today: 3 Capulin Cherry and 1 Bellflower apple. The probable site of the historic Russian orchard is marked with green posts. On the left – The Russian orchard as it may have appeared in 1842 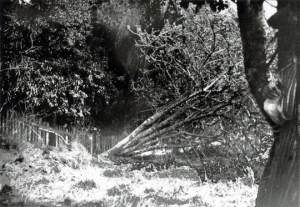 Ranch Era – William Benitz owned Fort Ross from 1845-1867. During that time he added 450 apple trees and 150 other fruit trees to the Russian orchard. He also established a new orchard with 1500 named variety apples nearby. The orchards thrived and provided a good income. Between 1853 and 1855 he shipped 20,000 lb. of apples from Fort Ross to Sonoma. George W. Call and his family owned Fort Ross between 1873 and 1976. The Calls added 1200 apple and pear trees to the orchards, and shipped the fruit to San Francisco. They started olive trees from seed and put them in the old orchard. They also planted a new orchard to provide fruit for their family table. The “Plum Orchard” survives today, upslope from the Russian orchard.

In 1906 the earthquake that destroyed San Francisco and the chapel at Fort Ross badly damaged the orchard, which is sited on the San Andreas Fault. During the 100 years that the Call Family owned the orchard, many trees aged, died and were not replaced, fences fell and animals were grazed. Learn more about Ranch Era at Fort Ross. 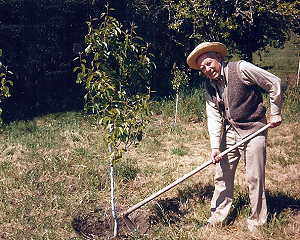 Orchard Today – When the orchards came into the California State Park system in 1976 there were 199 trees surviving from the Russian and Ranch Era. In 1985, Park staff and volunteers, recognizing this resource was endangered, put in a protective fence and planted new trees taken from cuttings of the originals. On the left you see volunteer John Smith planting a new apple tree grown from original orchard cuttings.

The orchard is generally open to the public, during daylight hours. The site is on Fort Ross Road ¾ of a mile uphill, northeast from the park entrance gate on Highway One 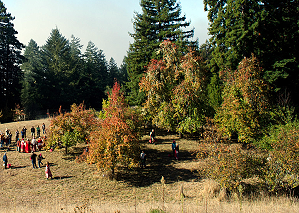 Apples and pears are ripe between August and November – picking is allowed in small quantities for personal use only.

The orchard is an old, fragile and living resource – treat it with respect.

Do not strike the trees with sticks to harvest fruit.

Do not climb the trees.

Do not shake the trees. 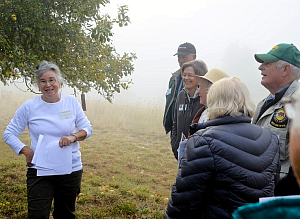 We have stabilized the trees and orchard perimeter to better protect the trees.

In addition, FRC would like to re-create the Russian orchard by:

Orchard Management Plan – In 2014 a team of experts from National Parks, California State Parks, and Fort Ross Conservancy have researched and documented the history and health of our Fort Ross orchard. This 350-page document describes its historic significance in remarkable detail. It describes the orchard’s history, assesses each tree’s provenance and current state, and suggests strategies to ensure this living resource remains an important part of the Fort Ross landscape.

Many good people had a hand in creating this plan. Susan Rudy, Fort Ross Conservancy adviser and lead orchard volunteer, initiated the project, served as project liaison, and organized the fieldwork.  We suggest you view a PDF version from FRC’s digital library (search for “Orchard Management Plan”) and read on!

The Orchard Management Plan has been generously supported by the Renova Fort Ross Foundation.