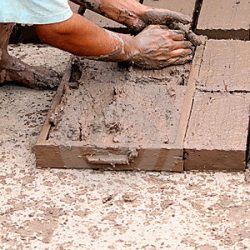 Due to a natural supply of clay in the area around Fort Ross, bricks soon became a valuable trade good for the Russians. Brickmakers made and stored the bricks in a brickworks outside of the Fort. Thousands of these bricks, as well as dried clay in barrels, were then shipped to Russia and Russian Alaska. Despite the high demand and having “excellent clay” for the job, not all of the brickmakers were entirely competent, however, causing the Fort’s manager to complain that one brickmaker “makes only 140 monstrosities per day” and “ruins the bricks.”

According to Wrangell’s report, by approximately 1832 brickmaking was more important for export to Russian Alaska than for domestic use at Fort Ross, so the brickmaking works was moved from Fort Ross to Bodega Bay (Port Rumyantsev), closer to the port of embarkation.