Back to "Common Earth, Common History" 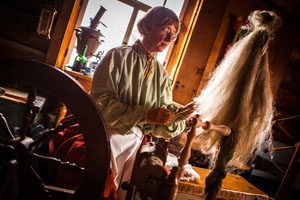 The Russian American Company sent a craftsman by the name of Nikolay Cheremnoi to assist in felting and fiberworks at Fort Ross. The settlement had a herd of sheep that provided wool, and there was also an attempt to grow hemp plants in order to make sailcloth and rope. The sheep provided both coarse and fine wool; the fine wool was combed, spun, and woven or knit into clothing. The coarse wool was mostly used for making heavy blankets or felt mattresses. Other handmade woolen articles included hats, stockings, mittens, and horse harnesses. The cloth items made at the Fort were often traded to the Californios, sent back to Russia, or given to the Native Americans as payment for their work. 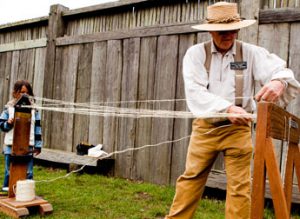