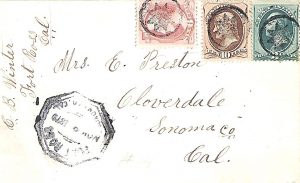 Geography had conspired to make the northern coast of California one of the most difficult areas to access on the planet. Transportation and communication, even under the best of conditions, was limited to mountainous paths and a few poorly maintained roads, or by equally dangerous travel by ship along the rugged coast. All of these factors left Sonoma and the adjoining counties extremely isolated from the outside world. This would be especially the case when it came to establishing tenuous mail routes. The delivery of mail was challenging to say the least when it came to road washouts, downed trees and the occasional road agent.

Postal communications began in California with the first European settlement and the arrival of the Spanish in 1769. Letters were used as official correspondence between the twenty-one missions, four presidios and three pueblos that made up the Spanish borderlands and the outside world. Soon after, as other Europeans and Americans began to show up along the coasts, residents had other options for dispatching mail. Still, Californios had few easy means of communicating with the outside world; either sending mail by a long and hazardous overland route to Mexico or by the sporadic arrival of ships along the coast. With the first appearance of the Russians in 1806, Alta California was opened up for the first time to trans-Pacific communication networks that included Siberia – and by extension European-Russia, Alaska, and the Hawaiian Islands.

The earliest letters took the form of sheets of writing paper folded and sealed with wax wafers. The outside would be addressed and sometimes dated by the sender and often docketed by those that received them with date received and a summary of the letter’s contents. With the introduction of paper envelopes in the 1840s, sheets of various sized paper were inserted into the gummed envelopes designed to be sealed by moisture. In time these envelopes became known as “covers.”

Official manuscript cancellations noting dates and places of the correspondence’s origins are known for the Spanish and Mexican periods. Eventually, officially-produced handstamp cancellations were applied to outgoing mail from Alta California. The earliest known example of such an inked, stamped cancelation is from 1834 carried by a military carrier between Monterey and San Diego. No known handstamp cancelations from the Russian-American colonies are known to the author, but they could easily exist in Russian archives and other collections. Some idea of this extensive volume of mail, sent and received, can be gathered from publications by James R. Gibson, W. Michael Mathes, and Glenn J. Farris.

The first large-scale use of metal or wooden handstamps was introduced to California with the California Gold Rush in 1848. From two official US post offices in that year, the number of post offices grew to over 500 by the 1860s. In 1847, the first postage stamps were introduced by the U.S. Post Office, and postage stamps became mandatory in 1856. These handstamps were mandated by postal regulation to include the name of the town, but also the state and the date (and sometimes the year) the letter was received by the post office.

The use of stamps also meant the need for some form of cancellation to prevent their reuse. These took many different forms: pen-and-ink manuscript crossing marks on the porous surface of the stamp, or inked metal or wooden hand stamp impressions. Because the use of manuscript cancellations predates the opening of the Fort Ross post office in 1877, none probably ever existed.
Since manuscript cancellations were prohibited after 1860, new devices came into use as stamp obliterators or “killers.” They were often produced by the postmasters themselves from anything at hand; cork, wood or metal. Before becoming standardized, these often took on very unique and creative designs. A new type of uniform machine cancelation came into use at the turn of the 20th century with 4-Bar stamp obliterators for the stamps as part of the whole circular cancelation.

Postmasters were not furnished with handstamps from the Post Office until 1884. Prior to that time, only post offices that produced $300 in annual revenue received them automatically. This meant that many postmasters had to purchase their own at a cost of between $1.50 and $2.50 from various suppliers. At no time during its early years of operation did the Fort Ross post receive the needed amount to be automatically issued a handstamp. Early on, handstamps took various forms, circular (usually 29-33 mm), oval, or a multisided shapes. An examination of early Fort Ross covers reveals the use of some interesting shapes, sizes and letter fonts.

Below are two 1879 Fort Ross covers using the earliest known handstamps. The first cover has a fancy octagonal handstamp typical of the 1870s and 1880s that also lists Sonoma County. It is accompanied by an 8-pointed star in circle “killer.” It is the earliest known date for this type. 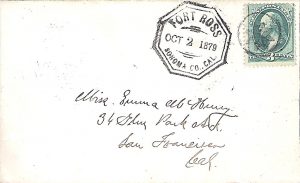 The second cover has 18 cents in stamps to cover the cost for registered mail. Registered mail required that each postmaster along the route had to personally take responsibility for the letter’s delivery by signing off on receipt of the letter, before forwarding it on to the next office. Registered mail was first introduced in 1855. The letter’s cost had to be paid in stamps after 1867 (initially including a 5-cent registry fee).

The next cover, dated April 30, 1884, tells us a particularly fascinating story concerning life Fort Ross. The official Signal Service cover below is of particular interest in that it points to a little-known part of Fort Ross’ ranch era history. The extra-large 31 mm cancelation with bold lettering is the only known example for this type. 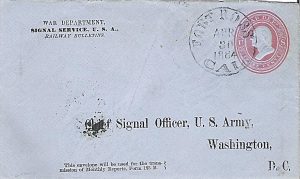 The US Post Office began issuing stamped postal stationary envelopes in 1853 and official postal envelopes for government use in 1874. The pre-printed blue cover was used for official War Department correspondence. This particular cover most likely held a monthly climatological report made at Fort Ross in 1884 for the Signal Service. The Signal Service was established in 1870 as the weather observation section of the Army Signal Corps. Usually most periodic weather-related data was collected through the US Military Telegraph (USMT) system all across the American West. Locations that did not have access to the telegraph would have sent their collected data by the US Mail instead. George W. Call first began making voluntary weather observations in 1874. This proud tradition of sixty-four years of uninterrupted climatic measurement was carried on by his son Carlos and was acknowledged by the National Weather Service in 1972. This meteorological data, collected from throughout the West for over a century, continues to provide valuable information from today’s climatologists.

The next cover, with a 5-cent stamp addressed to Switzerland, provides us with evidence of the small community of Swiss-Italian dairymen that resided at the Fort Ross ranch. 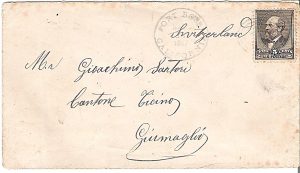 An examination of the 1887 cover’s backside reveals not only the route, but time involved in transit. It first took the March 17 cover a week before reaching New York. After crossing the Atlantic, it finally reached Locarno on May 4, 1887. 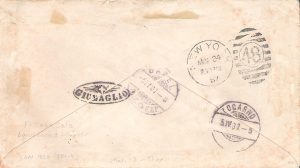 The following two covers are interesting because of the stamped corner card advertisement they each carry. The first carries a more standard sized handstamp and target “killer” and is dated July 11, 1894. It also has an incomplete corner card advertisement that has been incorrectly filled in by a former collector as part of attempted repair to “restore” the envelopment to its original state. If it was not for the following cover, we might be left to puzzle over watchmaker’s first name. 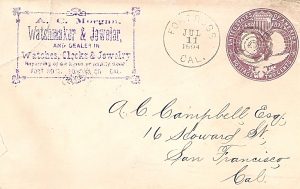 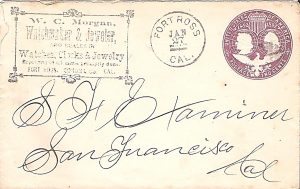 The second has a complete corner card that correctly lists the watchmaker’s name as W. C. Morgan. William “Uncle Billy” Morgan took on a number of roles at the Fort. He not only operated the Fort Ross Hotel and dance hall for George Call, but also helped at his store which housed the post office.

It makes use of the same handstamp, but with the year missing, and a crude cork killer cancelation. The lack of year date was probably due to the fact of Call not having the proper year slug to use in his handstamp. This handstamp is only known for the years 1893-94, so the reverse San Francisco cancelation for January 28, 1896, indicates that it was still in use a couple of years later. It should be noted that there are also two unique handstamp cancelations known for 1892 and 1900.

The Twentieth Century ushered in the use of more uniform and standardized handstamps (30-31 mm) which are accompanied by 4-bars. The last three covers are all examples with subtle variations of this distinctive type. 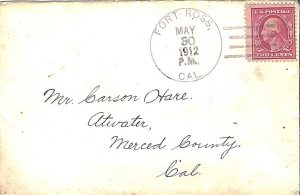 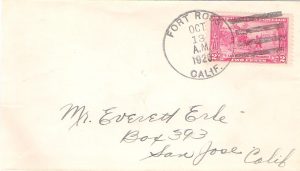 The next cover is of particular interest in that it represents a special class of covers created for stamp collectors. It is known as a “Last Day Cover” and as is often the case with these covers, they are not only dated on the last day of operation but are also signed by the postmaster/mistress. In this case, Carlos A. Call, son of the first postmaster and second and last operator of the Fort Ross Post Office. Prior to its final day of use on November 30, 1928, it had graced other envelopes for the previous three-years.