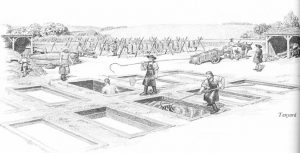 The most profitable industry run by the Russians in California was hunting sea otters for their pelts. These pelts need to be treated and prepared at the Fort Ross tannery before they could be shipped back to Russia or traded with the Spanish. The tannery was built “for tanning, dressing, and preparing hides,” and the tanners used lime from sea shells and tannin from oak bark in the area. Besides sea otters, the tanners also prepared cow hides, deer hides, seal skins, wild goat skins, and sea lion skins. The goods made from these hides included shoes, leather, and deer hide suede. Sea otter pelts were the most popular item for trade, however, but they were soon hunted to near extinction along this stretch of coastline.
From The Khlebnikov Archive – Unpublished Journal (1800-1837) and Travel Notes (1820, 1822 and 1824), © 1990, University of Alaska Press. ISBN #0-912006-42-0