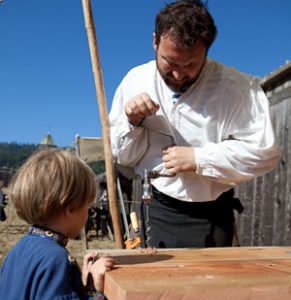 Coopering and carpentry were valuable trades at Fort Ross. Coopers constructed many barrels out of oak and redwood that were needed to store and ship meat, clay, wheat, and other perishable items. Woodworkers, carpenters, and joiners constructed wooden goods for trade with the Californios, such as pre-made houses, carts, carriages, wheels, doors, and longboats. They also made and shipped redwood shingles back to Russia, on ships that they built at the Fort’s shipyard. The Fort itself was constructed out of redwood, and included a stockade, the manager’s house, a storehouse, and barracks, among other buildings.