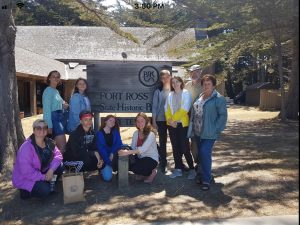 Since 2015, Project Harmony International, with support from the US Embassy in Moscow, has organized the Russia-wide Russian American History Video Contest (previous called the “Create Your Fort Ross Quest” contest). The contest aims to promote U.S.-Russian cultural ties and attract young people to important milestones in U.S. and Russian common history through the use of innovative digital resources. Each year, high school teams from across the Russian Federation submit creative online videos, quests, video games and internet-based tours based on Fort Ross historic documents and Russian American history. Participants are enthusiastic to learn about the history of this Russian settlement in California, saying that it opened a new page in U.S.-Russian cultural and historic interaction for them.

My heart is filled with sincere admiration and gratitude to those ordinary people, who for many, many years, preserve, maintain and restore the “Russian heritage,” who work on organizing historical and seasonal themed festivals to let people remember and not forget their history, their roots, to maintain and develop good‐neighborly relations. 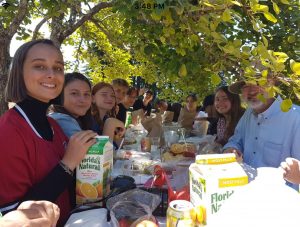 Each team consists of three high school students and a teacher. Each student team is reviewed by a panel of experts which include staff at Fort Ross Conservancy, leading Russian researchers on Fort Ross, an IT specialist, and representatives of the U.S. Embassy’s Public Affairs Section. The panel selects semi-finalists who then must participate in Skype interviews. The winning teams receive a trip to the United States and a visit to Fort Ross during its annual Fort Ross Festival event, as well as stops in Washington, D.C. and San Francisco (itineraries may vary from year to year). Winners have hailed from diverse parts of the Russian Federation, from the suburbs of Moscow, to a town along the Arctic Circle, to the Russian Far East.

Each year Fort Ross Conservancy looks forward to hosting the winning students. In addition to taking part in our annual Fort Ross Festival, the students receive a private tour of the fort and surrounding areas, including the historic Fort Ross orchard, Spyra Redwood Grove, and the Fort Ross cemetery.We coordinate a meeting between the Russian students and the Kashia Pomo, the first inhabitants of these lands. The students also learn about Pacific Ocean marine ecology and stewardship through participating in FRC’s Marine Ecology Program. Lastly, FRC invites the local community and Fort Ross Festival attendees to join the Russian students when they share with us brief presentations about their home towns, giving Americans the opportunity to learn about the many diverse regions of Russia.

The ticket to the future, a team from Petrozavodsk, Republic of Karelia, (between the Baltic and White Seas) tells the story of American Finns who arrived in Russia and in Petrozavodsk in particular in the XIX century to build their new life. The animated story with lots of hand cut paper scenes tells about the people who once belonged to the USA and then inspired the Russian city development.

Bee Bees or Bashkir Bees from Salavat, Republic of Bashkortostan, (between the Volga River and the Ural Mountains) share a story of a book that was once collected in the US during the Books Collection Drive and then was found in Salavat School Library. The team made a research and found a person who donated this particular book.

Lingva Tigers team from Artyom, Primorskii Region, from the Far East of Russia. This team tells the fascinating story of saving and preserving Amur tigers with the help of GPS, a technology from the USA serving Russian needs. Hand made сartoons, deep research, and interviews with specialists made the video so exciting.

Donuts team from Bakchar, Tomsk region, Western Siberia, chose its name on purpose. The video story about combine harvesters they have filmed tells about the American invention that made the life of many Russian people easier. 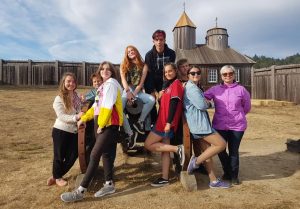 The Acorns of Peace, a St. Petersburg-based team, were the first finalist team. They created their own paintings and drawings to tell the story of George Sumner, a nineteenth-century American researcher and traveler, and his journey to Russia. When meeting with the Russian Emperor, he presented him with an acorn from George Washington’s Mount Vernon, a symbol of respect and friendship between the two nations.

The second finalist team, Soyuz-Apollo, is from Volgograd (on the Volga River) and was inspired to name their group after their project topic, the Apollo-Soyuz Test Project. This mission marked the first joint U.S.-Soviet spaceflight, when the Apollo Command Module docked with the Soviet Soyuz 19.

The winners travelled to the United States in July 2018 to visit New York City, Washington D.C., and San Francisco and participated in the annual Fort Ross Festival!

Here are some interesting observations from the 2016 Quest Winners.

We crossed the Atlantic Ocean, opened dynamic New York city, met Lady of Liberty. We drove by bus to hot white‐stone Washington, visited all the Smithsonian museums and even got registered in the Library of Congress. Then we crossed North America over amazing landscapes, saw the most beautiful Golden Gate Bridge in the atmospheric city of San Francisco. We drove along the breathtaking serpentine road, admiring stunning views: the omnipresent shade, sharp rocks, frightening crevasses, towering mountains, incredible storming Pacific Ocean. Finally we came to Fort Ross the place we have dreamed to visit.
–Evgeny Sovietov, Cherepovets