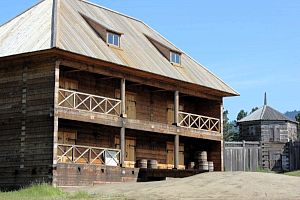 This two-story Russian-American Company warehouse, or magasin, functioned both as company store and as a warehouse where supplies for agricultural operations and hunting were documented, assessed and stored for distribution. Reconstruction of the fur warehouse (“magasin”) and interpretive display was completed by California State Parks in 2012. Click here for the warehouse brochure.

Goods stored in the warehouse reflected extensive Russian trade with Spanish and later Mexican California, as well as Britain, the United States, Europe and China. The Pacific Coast as far north as the northern boundary of the current state of Washington was claimed by England and Spain. In 1812 the Spanish had no settlement north of the Presidio of San Francisco.