A brief update from me -- and please don’t neglect the two very interesting articles below the fold. 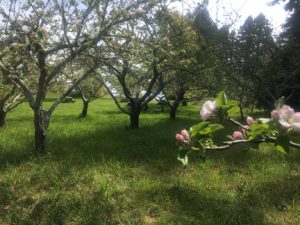 We are close to wrapping up our mid-year Fort Ross Education Fundraiser to ensure that more young people can experience our wonderful outdoor educational programs. Please consider making a donation. Your donation of any amount makes a difference to providing equitable access to our outdoor programming.

While we usually welcome thousands of kids to Fort Ross and Salt Point parks, this year we’ve pivoted to online distance learning to make sure we can bring our remarkable outdoor landscape & classroom to students learning remotely, to bring them something akin to a dose of nature. Our new interactive online programs offer a different experience than learning on the land with all one’s senses, but it does reach students who otherwise would not be able to travel — we’ve had students from Las Vegas, Hawaii, and Russia.

An interactive online experience with our instructors is $5 a person, the per-person fee for an onsite day program is $20, and our onsite overnight program is $40. Your donations have a direct impact in connecting students to the history and beauty of Fort Ross. Please consider making a donation today -- and a big thank you to all who have donated.

Tours!
Now that Covid restrictions are easing and visitors are returning, FRC is once again offering private tours and limited weekend interpretation. Fort Ross has such a rich history and we know the visitor experience is better when we have an interpreter to tell a fuller story, the more so because the park’s buildings primarily represent the Russian era, and don’t begin to portray a fraction of what Fort Ross looked like. (Oh, to see the full Settlement Ross developed some day, where village life and all the diverse inhabitants might be represented. A nonprofit can dream!)

FRC will provide an interpreter for some weekend hours, and we hope to increase our summer interpretation as finances allow and we begin to recover from a very difficult year.

Or, you can schedule a private tour with our knowledgeable staff to ensure we have someone available on the ground. Tour descriptions, pricing, and booking details are here.

This spring season feels full of promise. Visitors and community members are making their way back to Fort Ross and we are excited to experience the recovery. We hope you are (safely) getting out more, enjoying the season, and spending plenty of time in the great outdoors.

Fort Ross and the 1906 Earthquake 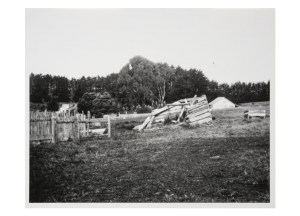 Flashes of light and explosions were heard in the vicinity of Fort Ross/Metini after a massive earthquake measuring 7.9 on the Richter scale struck the coast of Northern California at 5:12 am on April 18, 1906. The San Andreas fault travels less than a mile north of the Fort Ross compound and when the natural disaster struck, several Russian structures fell down like a deck of cards. The chapel collapsed under the weight of the roof while the palisade and the blockhouses were severely damaged in the aftershocks.

Landowner George W. Call was asleep in his Victorian house at Fort Ross on an early Wednesday morning when suddenly a bookcase was thrown across his bed. G.W. Call rushed to the window in fear of a possible tsunami as ongoing trembles continued to violently shake his home overlooking the Pacific. While watching the “perfectly still” waters of the ocean, Call witnessed his furniture being tossed about and heard the sound of breaking glass. Outdoors, Call observed hanging lamps swinging in a “circle corresponding with the apparent movement of the sun,” and he described the sound of the land itself tearing open as the San Andreas Fault ruptured.

About a mile southeast of the fortress, where Swiss-born John Doda lived with his family on a separate ranch, the earthquake experience was equally frightening. One of Doda’s children was repeatedly tossed into the air as the child was eating breakfast. A farmworker saw a water tank thrown vertically upward about 5 feet before crashing to the ground. Mr. Doda, who was hired by Mr. Call to serve as his foreman in the butter-making industry, reported that the earthquake caused immense cracks in the vicinity of his house from which “strong gases [were] emitted which [made] men and cattle sick.” These gases ignited as “explosions” and “flashes of light” were reportedly witnessed in the area. 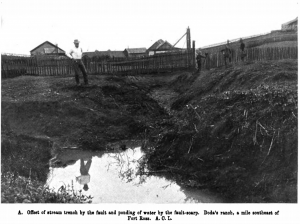 The 1906 earthquake changed the topography of the entire California coastline, after a 296 miles rupture formed along the San Andreas Fault - the tectonic boundary between the Pacific Plate and the North American Plate.

Visiting the area in the aftermath of the earthquake, Fusakichi Omori, a member of the Japanese Imperial Earthquake Investigation Committee sent to California to record the level of destruction, noted the abundance of cracks produced in the hills above Fort Ross, which were marked by a series of small “sag” ponds formed in newly created crevasses around the historical orchard area. 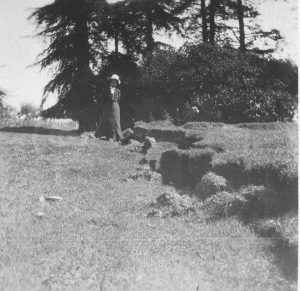 Thankfully, except for broken jars, collapsed chimneys, and a few damaged buildings, no casualties were reported in the Fort Ross area. San Francisco, on the other hand, was not so lucky: the city of 400,000 laid in ruins and reported 3,000 dead. over a few dozens “subparallel cracks” around Fort Ross, most notably around the Doda ranch, with one opening traveling about 1,125 feet. The investigation recorded substantial offset - between 12 feet and 15 feet - along the trace of the fault as a result of the earthquake, calculating that the vertical component of the surface movement in the vicinity of Fort Ross did not exceed 4 feet. Furthermore, several landslides were reported about 3 miles south of the fort with one of them measuring 400 feet in height. 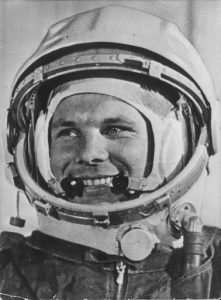 The month of April turned out to be rich for events celebrating the beauty of our great planet which is now being battered by the effects of climate change. Unless humankind unites to better care for earth’s great resources, the face of our planet and its abundance of life could forever be altered -- with some species erased from existence; one historical example of such loss is the Steller’s sea cow. But first, let us start with the human exploration of space, and how the first descriptions of Earth’s beauty from outer space inspired environmental conservation back on terra firma.

Sixty years ago, on 12 April 1961, Soviet Cosmonaut Yuri Gagarin became the first human to explore space after spending 108 minutes in orbit onboard the Vostok 1 spacecraft, circling around Earth. The first description of Earth from beyond our planet captivated billions of earthlings.

“Orbiting Earth in the spaceship, I saw how beautiful our planet is,” Gagarin said after returning from space. “What beauty! I saw clouds and their light shadows on the distant dear earth.... The water looked like darkish, slightly gleaming spots.... When I watched the horizon, I saw the abrupt, contrasting transition from the earth's light-colored surface to the absolutely black sky. I enjoyed the rich color spectrum of the earth. It is surrounded by a light blue aureole that gradually darkens, becoming turquoise, dark blue, violet, and finally coal black.” 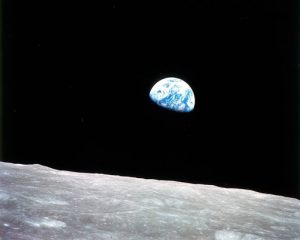 It would take another seven years for the world to see what the Earth really looked like from the unconfined boundaries of the cosmos. “Oh my God! Look at that picture over there! There's the Earth coming up. Wow, that's pretty,” Apollo 8 astronaut William Anders said when he snapped the iconic Earthrise image that captured the imagination of people and helped to inspire the first Earth Day, on April 22, 1970.

Earth Day became the first major global initiative to protect and conserve the planet by inspiring individuals, communities, businesses, and governments all over the world to take action and help preserve the natural beauty all around us. Today over 1 billion people across more than 190 countries are part of this environmental conservation movement.

Environmental scientists are in agreement that our planet is in trouble due to the effects of climate change; the ozone layer is depleting, ecosystems are being lost, and species are disappearing rapidly. Currently, IUCN estimates that 37,400 species are threatened with extinction. If we don’t act now, some of these species will suffer the same fate as the Steller’s sea cow which went extinct in the 18th century, shortly after being described by the German naturalist in Russian service Georg Wilhelm Steller.

Steller was the personal physician to Danish Navigator in Russian Service Vitus Bering, who alongside Russian explorer Alexei Chirikov became the first Europeans to explore and lay claim to Alaska in 1741. On their return voyage to Russia on St. Peter, the vessel was shipwrecked on what later became known as Bering Island. While the surviving crew salvaged building material to make a 40-foot boat to make it back home, Steller wasted no time recording the flora and fauna around him with at least a dozen animals now bearing his name, including Steller's sea lion, Steller's eider and Steller's sea eagle. 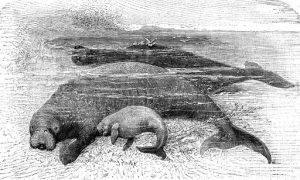 Unfortunately, the docile Steller’s sea-cow, whose mystical existence fascinated people since the time of Aristotle, quickly became extinct due to over-hunting by the European arrivals to Alaskan shores.

Steller’s work - The Beasts of the Sea - outlining his scientific discoveries made during his expedition to Alaska with Vitus Bering, contains the only scientific description of Hydrodamalis gigas. This sirenian once inhabited the North Pacific Ocean and the Bering Sea before going extinct in 1768. Steller’s sea cow was a 30-foot long, plant-eating aquatic mammal weighing up to 12 tons. It is a great shame that the animal’s highly sought-after meat led to the annihilation of these extremely smart and affectionate creatures.

“If one animal is caught with the hook and begins to plunge about rather violently those near him in the herd are thrown into commotion as well and endeavor to assist him. To this end some of them try to upset the boat with their backs, others bear down upon the rope and try to break it, or endeavor to extract the hook from the back of their wounded companion with a blow from their tails, and several times they proved successful,” Steller wrote describing his amazement of the animal’s courage.

“It is a very curious evidence of their nature and of their conjugal affection that when a female was caught the male, after trying with all his strength, but in vain, to free his captured mate, would follow her quite to the shore...when she was dead he would sometimes come up to her as unexpectedly and as swiftly as an arrow. When we came the next day, early in the morning...we found the male still waiting near his mate; and I saw this again on the third day when I came alone for the purpose of examining the entrails.”

Today, the coastal waters of Fort Ross and Salt Point State Park are part of the Greater Farallones National Marine Sanctuary, an extraordinarily marine ecosystem that is home to at least twenty-five endangered or threatened species. Fort Ross Conservancy strives to do its part to improve the health of our oceans. Our staff are involved in a number of long-term shoreline monitoring projects which help scientists understand the health of the Pacific. Please do your part to protect California’s natural resources -- consider signing up for our many volunteer opportunities.

To put it in the words of Yuri Gagarin, “People, let us preserve and increase this beauty, not destroy it!” Happy Earth Day and International Day of Human Space Flight!