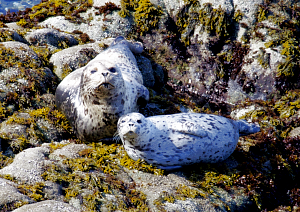 With an average size of 5-6 feet long and weight 200-300 pounds, the Harbor Seal is the smallest of the earless seal. With few sexual differences, male and female Harbor Seals have short limbs, small earholes and a coarse fur coat that lacks insulation that they receive from a thick layer of blubber. Their fur has a mottled coloration that varies widely in color from brown to silver or spotted black. Some seals are red from iron oxide in their fur; the origin of this is unknown, but some theorize it comes from the iron-rich sediments where they capture prey.

While the Harbor Seal is the only pinniped found in the northern waters of the Pacific and the Atlantic, it is also the least pelagic of the pinnipeds, generally coming on shore every day. Harbor Seals typically live in estuaries or near shore, in rocky or soft bottoms areas. They rarely go more than twelve miles from shore and have been known to travel up rivers when pursuing prey. In forage groups of up to 25, Harbor Seals feed on the species abundant in the area, mainly schooling fish, cephalopods, and crustaceans. The average dive for food is only 16 feet, but dives up to 1,640 feet have been recorded. Foraging at night and resting during the day, Harbor Seals eat about 4-8% of their bodyweight in food every day.

Breeding season for the Harbor Seal takes place in May and June, followed by an annual molting. The seals in more southern areas act mostly in the earlier part of the season, with northern seals following later in the season. Mature females give birth annually to pups that can swim at birth, and nurse for 30-45 days. Because they lack maneuverability on land, their preferred haul out sites are low or sloped rocks. It is also important that they choose sites with wide visibility to see predators. Harbor Seals are generally considered non-migratory, but there is significant mixing of individuals among colonies outside of the breeding season.

Harbor Seals are killed mainly by great white sharks, but also by Steller Sea Lions and Killer Whales. While the general range of harbor seals has not changed since prehistoric times, individual sites have been abandoned because of large amounts of human disturbances like small boats, noise, dogs, and low-flying aircraft. Populations seem to have declined in the Gulf of Alaska since the 1980’s, but steadily, slowly increasing in California.