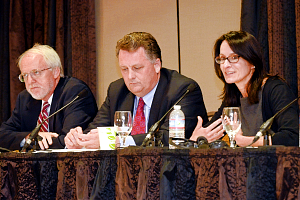 Fort Ross Conservancy hosted its first Fort Ross US-Russia Dialogue in July of 2012, bringing together thought leaders from both US and Russia, and the response was overwhelmingly positive. On July 29th, 2013 at Vintner’s Inn in Santa Rosa, we again hosted US and Russian business, policy, cultural and governmental leaders to discuss current and future relations between our countries. The 2013 Fort Ross Dialogue event included both a private bilateral government component and a public conference, addressing two distinct themes: building institutions, with special reference to the US-Russia Bilateral Presidential Commission and its exchange/culture and energy/environment working groups; and strengthening the cooperative Pacific dimension of US-Russian relations dating back to the Russian-American Company and its southernmost California settlement in the 19th century.

Speech of Hon. Jared Huffman of California in the House of Representatives July 30, 2013 (Library of Congress)