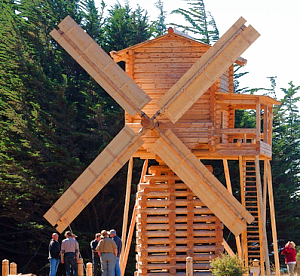 Fort Ross had two windmills, both of which were the first windmill west of Mississippi. The first mill was constructed in 1814, not long after the Russians settled Fort Ross. The second mill was built in 1841. The windmills served two purposes: to grind grain into flour for baking bread for both Settlement Ross and the Russians’ Alaskan settlements, and to power the stamping of local tan bark, used in the hide tanning industry. These were very likely the first windmills west of the Mississippi River.

The windmill now standing at Fort Ross is a gift from Link of Times, a Russian-based cultural and historical foundation chaired by Viktor Vekselberg. It was constructed in the Vologda Oblast in Russia, where Ivan Kuskov and other RAC employees were from, and then disassembled, put into two containers, and shipped to California, where it cleared customs and was trucked to Fort Ross in September, 2012, as part of the Fort Ross Bicentennial.

Fort Ross Windmill Turning – Join us once a month for an informal talk about the windmill and its maintenance. See our Events page for upcoming dates and time. Questions? Email Hank Birnbaum hankb@fortross.org 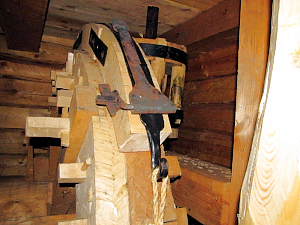 How was the windmill designed, and what is unique about its construction?
The design was based on the 1841 color painting of Fort Ross by Ilya Voznesensky. Research by Russian historical architect Igor Medvedev revealed that the Fort Ross windmills were similar to “stolbovka” (post) windmills made at that time in the northern Russian regions of Vologda and Archangelsk, home to many of the earliest Ross settlers.

While the original windmill was made mostly of redwood, this Russian reconstruction is primarily pine, with birch and spruce gears, bracing and other components. The substantial pine log-frame cribbing base is constructed around a central post sunk eight feet into the ground, backfilled with crushed rock.

The windmill, which measures thirty-two feet high and boasts thirty-eight foot blades, is manually turned on this central post to face into the wind. The main post and the twelve radial bollard posts below grade are fire-charred, a historic technique to reduce wood rot. On top is constructed the swiveling granary story with gears and four blades to face into the wind.

The mill was constructed using traditional woodworking techniques, using axes, adzes, drawknives and wooden pegs. The entire mill sits on 12 boulders; the force of gravity and the interlocking of the logs around the center post provide stability. The bottom logs are scribed to the contour of the boulders. Birch bark provides the water proofing membrane to protect the bottom of the logs from rot where they are in contact with the stones. Hand-forged iron fittings & braces, as well as two 200-year-old millstones from old Russian windmills were added to complete the windmill assembly. 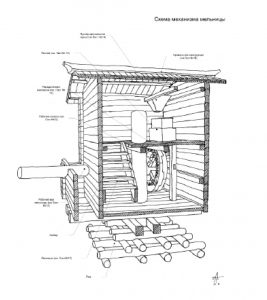 The mill house has two floors. The lower floor houses the main shaft and the main gear. The upper floor contains the mill stones and the hopper that feeds the grain into the mill stones. The two mill stones sit on top of one another wherein the top stone is supported by its shaft so that it barely touches the lower stone. The blades turn a series of gears which turn the top stone against the bottom stone. Grain is fed through a cloth funnel from a hopper into a center hole in the top mill stone. The grain is pulverized by the stones and exits through a chute into a sack or vessel. 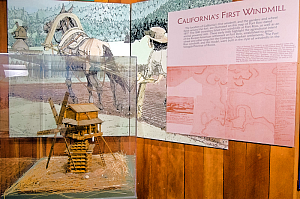 The site of California’s first windmill appears on the 1817 map of Fort Ross. From this map the windmill is located northwest of the fort on a rise midway between the northwest blockhouse, the Visitor Center and Highway One. The windmill is visible on the 1841 watercolor by Russian naturalist and artist, Ilya Gavrilovich Voznesenskii. There were two windmills at Fort Ross in 1841, with their millstones, as well as an animal powered mill.

The original Russian-era millstones are now located next to the reconstructed windmill, at the southeast end of the upper parking lot. 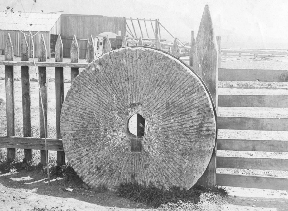 The millstones, up to three feet in diameter and one foot thick, were made of indigenous sandstone. They were once used primarily for grinding flour at Fort Ross.

The windmills highlight the important agricultural aspect of the Russian-American Company settlement at Fort Ross. One important reason for the establishment of the colony was to grow wheat and other crops for the Alaskan settlements.

The coastal fog, wind, rocky terrain, gophers and lack of trained agriculturalists combined to thwart this effort. Although the Company established three farms at inland sites between Fort Ross and Port Rumiantsev (Bodega Bay), and agriculture intensified after sea otter hunting diminished in the early 1820s, production was still insufficient. Trade with Spanish and Mexican California was conducted to increase the food supply to Alaskan settlements, and after 1839 a contract with the Hudson’s Bay Company supplied Russian Alaska with grain and other necessities.

On the hill to the north above the fort, just below the tree line, you can see the Russian orchard. The original Russian orchard encompassed two to three acres, and contained approximately 260 trees at its peak. Fruit trees were planted to provide for the Ross settlement in the early 1800s, and to supplement other agricultural products such as wheat and barley grown in California and shipped to the Russian colonies in Alaska.